Pluto & the Search for an antidote to Temptation 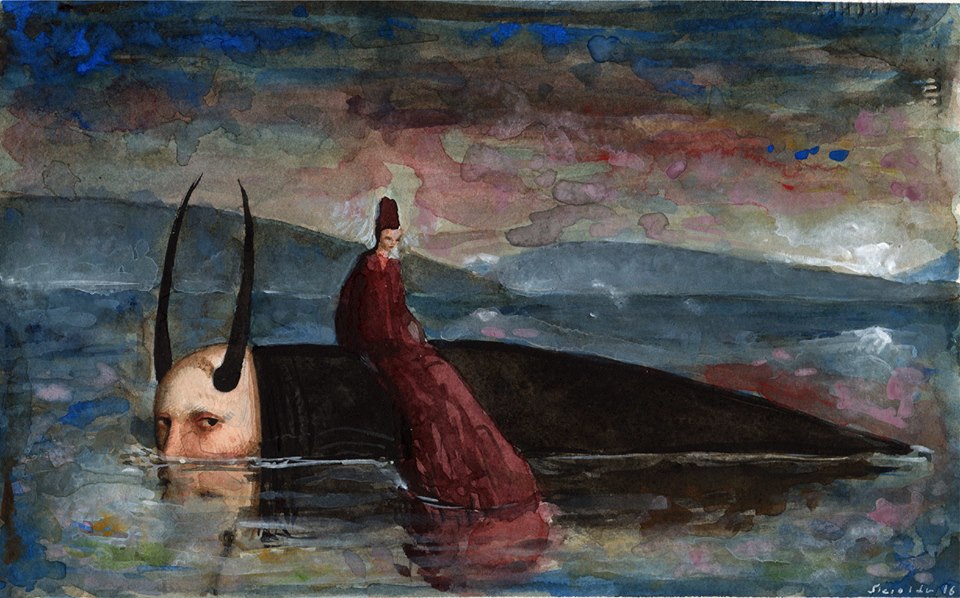 There is much that can be said about the Pluto contact upon the astrological natal. So much ‘dirt’ is becoming available on Pluto now that those who specialise in areas ruled by the ‘dark overlord of the underworld’ (subconscious drives/addictions, death & regeneration, transformation) can help to shed enormous intelligence on how Pluto’s influence can manifest, both personally and socially.

Where Pluto is involved in the chart, we often see a deep-seated desire for absolute power – an urge to seize control over things normally beyond scope of many mere mortals, to hold and exercise that power using any means possible to effect great change. As one esteemed colleague mentioned to me recently – a self-confessed Scorpio Sun, whose Pluto in Leo (x2) in her eighth house (x2) squaring her Sun/Moon opposition (x4) – which would make her a veritable ‘inside expert’ on the subject of all things Pluto – she can talk (formally in an exploratively didactic sense) about Pluto all day. In this, I would probably add that she might talk for weeks and still be scratching the surface of this amazing force.

Being the farthest planet from our sphere of earth-centred consciousness, with an 248-year cycle, Pluto’s effect is slow, intense and diabolically thorough. If you have him in your chart, or have experienced any transits to your personal points, then chances are, you have been through the ringer trying to understand the forces acting upon you.

Life is never the same after a brush with one of Pluto’s natives, and if you are one of those yourself, you may reflect upon your own life as series of very intense episodes, whose beginnings and endings have been as intriguing as the tension that builds in between. In these, you have not only managed to transform yourself, but the entire landscape that you have come to affect.

Discovered as the ‘ninth planet’ in February 18, 1930 by Clyde Tombaugh, Pluto was eventually demoted (by the IAU) to ‘dwarf planet’ status in 2006, and last year (2015) the New Horizons space probe finally exposed his face to all humanity by sending us some close-up selfies of this, formerly invisible planet. So up until recently, Pluto was a highly-elusive force (7.5 billion km) from earth whose influence nobody knew much about how to understand, let alone harness and control. Being ruler of the dead, his influence acted mostly on our mass-unconsciousness, gripping the collective psychology and pressing it into a state of terror, often creating a space for massive changes through actions which are not necessarily driven at an individual level.

Astrological Pluto rules over any activity that seeks to make great change in the world. Therapists, great doctors, healers, psychologists, religious, spiritual or political leaders that have a transformative influence, as well as demagogues, dictators, mob bosses, corrupt officials, spies and terrorists – all who have an uncanny knack of affecting the collective fate of the masses – are all operating at the Plutonic frequencies. More personally, Pluto is the force behind the psychopath, sociopath, narcissist, svengali, and addict, as well as the ‘agent’ on a mission to understand how invisible forces work between people.

Needless to say, all these ‘types’ are predisposed to some pretty extreme activity, traceable (in some form) through entire dynasties of their ancestral bloodlines – traits that tend dominate and recede, expressed and repressed from one generation to the next. Due to Pluto’s extensive cycles (by linear ♄ terms), the full karmic cycle is invisible to the scientific/political eye, taking about 10 generations to play out. This slow-acting, protracted, transgenerational effect, and the tight secrecy and absolute control that surrounds Pluto’s domain makes it so difficult to understand. So often, the surfacing of its issues is so hard to diagnose and link together that it is nearly impossible to solve the mystery that helps to unlock individuals from its spellbinding hold.

It seems that the laws of karmic fate may carry over from earlier lifetimes, where a desperate or perhaps wilfully determined ancestor had given in to their sinful temptations or had committed an unspeakable act of violence against nature just to gain a special edge or power over others that would enhance his/her own raw, basic instincts for survival.
Their obsession with the object of their desire – to such an compulsive extent that they would be prepared to make a fateful ‘deal with the devil’ – an agreement where they would betray or pervert their natural ties with their creator in exchange for superhuman gifts, would have harrowing, life-long consequences not just for the native, but also echo through into the lives of all those descendants who might follow.
So much mystery and intrigue enshrouds the family/cultural myth – sordid tales of power, abuse, rape, plunder, enslavement, corruption, violence, of good vs evil and highly binding contracts signed by ancestors that may never be known, yet still continue to extend beyond the grave, still playing out to affect us in our own lifetime. Or perhaps those affected in this life are simply reincarnated souls of that aforementioned ancestor, returning to continue to honour (or be enslaved) by their deal with the darkside.
We must look at Pluto’s influence in the native’s chart as one whose mission is somehow inextricably linked to a pre-natal contract of a predecessor, whose personal designs and desires have compromised their spiritual plight by pitting them into a binding force that will complexically play out through the ages. Often repressed (but by no means resolved) and largely unconscious, it continues to unfold through the family/cultural matrix and due to its complexity makes it nearly impossible for us to shed light upon the true source of some of the behaviour that is evident in today’s natives without undergoing some deep and thorough probing into the history of our condition.
In some sense, we may even come to understand how everything ties back to the story of original sin (Adam and Eve), and the fall of consciousness. This lead us into situations where our temptations still lead us into perpetuating our own darkness when we are given over to pride, envy, wrath, gluttony, lust, sloth and greed (the Seven deadly Sins).
Mythological Pluto (Hades) was lord of the underworld and judge of the dead, so it figures that many deep-seated problems are usually associated to deeply subconscious behaviour that emanate from unresolved matters that may have been inherited from beyond the grave. That these desires are still blindly followed, whether in our DNA, our deeply ingrained family programming, or imposed on us via grandpa’s will & testament, cultural standards & traditions, national constitutions, etc., we see that usually the kernel of the problem lies buried in some particular intent, agreement or determined decision made by our forebears for the sake of survival of their dominant genes over others.
We see them in history, when one tribe usurps the rights of another – like the mass invasion and wiping out of entire indigenous tribes to claim lands by force or violence, and we see them today, when by our constituted governments we wage war on other nations. Why? Because we want absolute control.
As I write this piece, the news in the background is that after a formal inquiry in the UK releases its findings that former prime minister Tony Blair had colluded with then American president George Bush and had indeed overstated to his nation the threat posed by Saddam Hussein, sending ill-prepared troops into battle which has since had monstrous effects on all families involved, both directly or, as we shall continue to see, indirectly through the unrest and recriminations that will play out through future generations. Of course, these violent actions are only a continuation of karmic threads that came before.
So it’s no wonder then, that in any investigation of a violation of ‘rights’ or a crime, or any aberration or perversion of nature, that after the event, investigators, therapists and detectives will tend to want to look into the history of the problem – to find out ‘where it all began’.

But do things really begin? Or do they simply repeat, time and time again, skipping the odd generation, becoming concealed, or repressed as it were, then re-emerging – like a recessive gene – onto the next?

The question then becomes whether all this violatingly subconscious behaviour, including its wildest perversions, is just a by-product of man’s interminable struggle for survival since that fabled fall of consciousness?

And if so, when will all this wilful, sometimes constructive energy in its transformative capacity, but more often destructive in its design to control and manipulate the world ever come to an end? 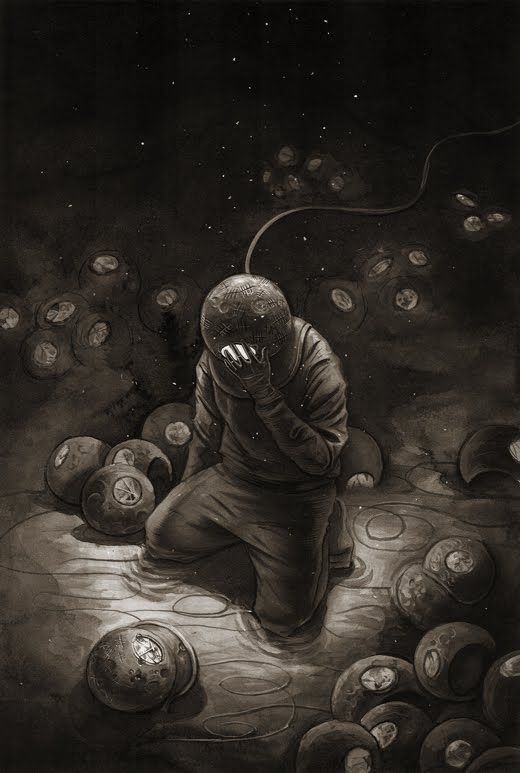 As always, the remedy to any ailment (or the antidote), is in the poison itself. This means that to deal with Pluto, one needs to use a little Pluto. In the past, dealing with bullies meant using another, bigger bully. Dealing with corruption meant using the system to corrupt the corrupted. Dealing with the psychotic meant employing some form of extreme force. Whilst this may have appeared to appease the problem – it was no solution. This is what creates winners and losers. Victors and successors. Good and evil. And here lies the crux of the self-perpetuating problem. There is no healing here. Just more wounding.

But that was in the past.

During the succession of years between 2012-15, Pluto was subjected to  a 7-part series of electrical pulses from Uranus.

Uranus, a planetary energy known for its capacity to shake and disrupt anything it touches, had managed to jolt and to intercept many of these dark forces acting within and amongst us. It was a turbulent period, with many sudden breaks and eruptions (earthquakes, revolutions, acts of terror), enough to inject much insight into some of the blindly possessive conditions that affect our individual and collective fates. Over these recent years whilst Uranus was squaring Pluto, we suddenly we began to see that many of the agreements that we have been irrationally following, such as cultural traditions and religions that have ‘evolved’ to the level where they have given rise to global powers that threaten to dominate the earth and are now failing to make any sense. Ultimately, they have failed to empower individuals with a sense of equanimity (greater than ever before) and the result is this unfoldment of separation among us, which is now reaching a critical mass.

It is here that we pick up our Cosmic journey, where we will use all tools available to us by Pluto – a perspicacity, or potential to look at ourselves and our world with determined, penetrating depth to find the archetypal engrams that continue to press us into actions and behaviours that seem possessed by forces beyond our immediate control.

This will take some courage.

Facing our addictions, compulsions, manias, deep-seated survival phobias with enough light to actually come to understand, embrace and forgive ourselves (and each other) is going be the only way to break the karmic spell imposed by agreements made in times of darkness or unconsciousness. Until we learn to master what possesses us, our spirits will continue to lie entrapped here on this plane, between the earth and the moon, where our souls will continuing to hover, repeating and regenerating, until they are somehow alchemically processed and purified to a redeemed state of pure light. 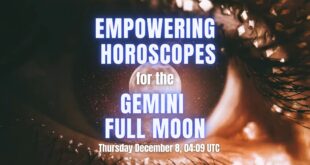 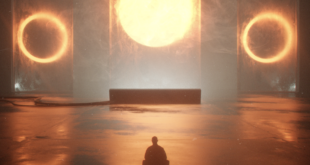 ‘THE QUEST, THE QUESTION & THE QUESTIONER’ Themes around the Gemini Full Moon [Cosmic Bus #2248]