It’s New Moon time again, and our life cycles are being punctuated by the special reset point by the two most important bodies in our geocentric lives.

Astronomically, a new moon is simply the moment when the Sun and Moon form a conjunction. Astrologically it means so much more. A new moon symbolises a fertile new start for us, a propitious moment to sow our seed, the time when we set an intention for any enterprise. In a rare event (“once in a blue moon”) two consecutive new moons may occur under the same constellation. On the most improbable occasion, one of these sign-repeating lunations also happens to be an Eclipse.

This is such an occasion. A double lunation in Leo – the first a New Moon at 00°♌44′, the second, a Total Solar Eclipse at 28°♌53′ (Aug 21) suggests that the universe might be trying to tell us something. Something specifically Leonine…

We know that when the Sun and Moon come together to form a unit, that the instinctive attitude we adopt in order to feel comfortable (☽) easily supports the way we wish to express our intention (☉). The fusion of energies promotes a general sense of certainty and composure, both socially and privately, propelling us confidently into the intention we set for ourselves. It is as if the heart and mind are inseparably bound together, and we become imbued with a sense of great immediacy and force for application, so that whatever is done is done wholeheartedly. 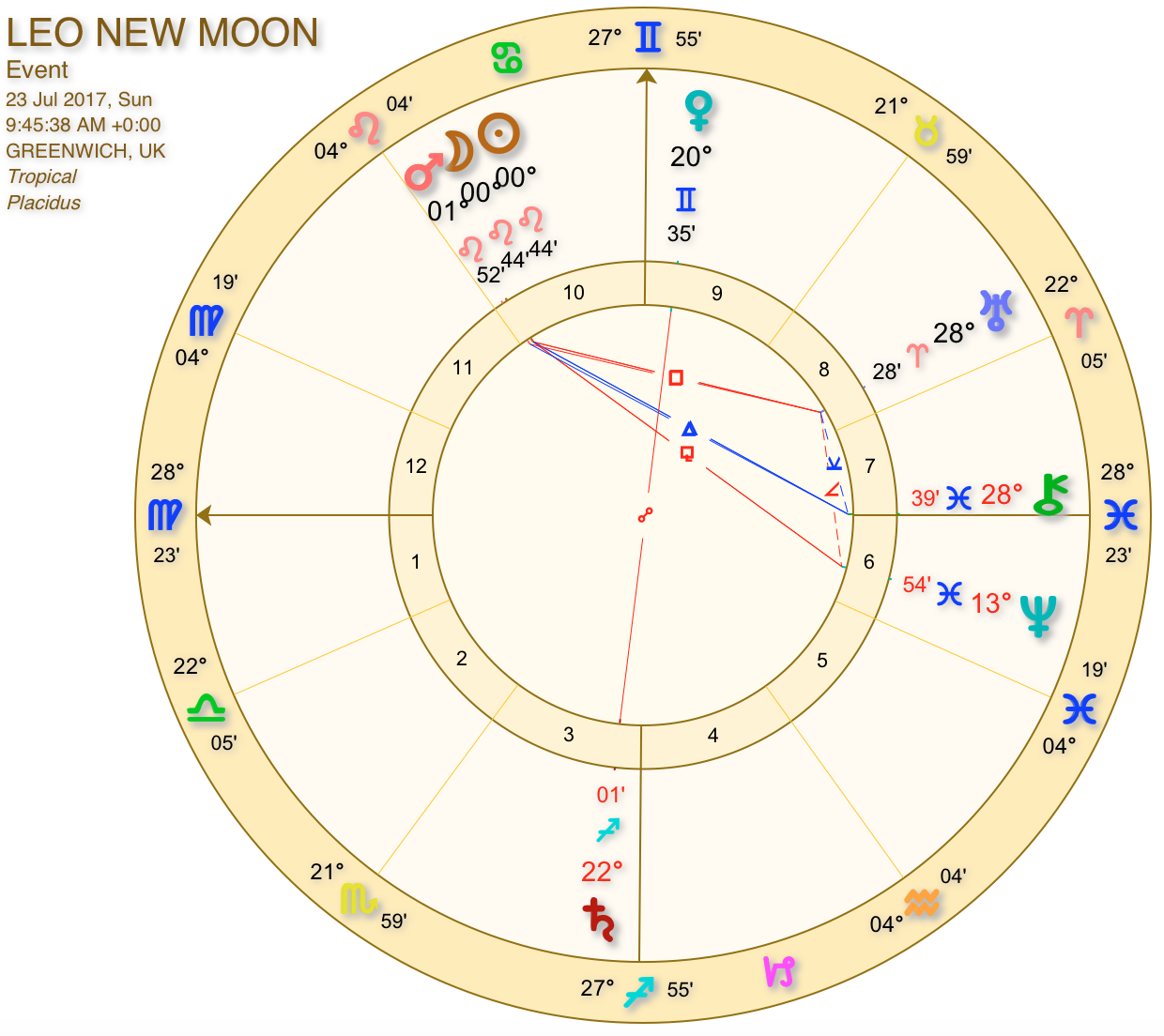 When the Sun and Moon are both aligned in this fixed(rigid)fire(spirited) sign, we can expect some degree of pride and extravagance of manner to be infused into whatever venture we chose to place our intention.

Leo exudes a special sense of magnetism, personal warmth, not nearly as egotistical or self-serving as people might expect. There is a boundless kindness, a fierce allegiance and generosity of spirit that radiates outwardly into those things we desire. These are preferably pursued with a kind of playfulness that is positive and inspiring.

Whilst the energy of this Sun/Moon intent is engaging and benevolent, the overall emphasis and due credit must always come back to Leo, for it is the respect and adulation from the crowd for which Leo lives; their attention to the unique image we wish to create for ourselves; the dashing flair and theatrical display with which we choose to turn it on; the applause and, oh… the royalties, the tributes and accolades that critics and admirers may throw at our feet for our fine performance, and the chagrin of those detractors and cynics. Like a sort of compassionate egomaniac, a benevolent dictator as it were – Leo lights up the side of us which is going to go all out for others, be brutal in attaining a specific effect, and will not only rise to eminence for it, but will not stand to go unnoticed for our efforts.

This is the Napoleonic position of this warrior force (♂♌), which when imbibed into this New Moon mix makes us determined to get what we want with such dashing and spirited vigour, such assuredness of grandeur and entitlement, such irrepressible animal magnetism and charm that it isn’t easy for others to deny us of what we consider to be our ‘rightful’ claim to ascension.

Those who resonate closest with this lunation will probably get away with all sorts of audaciousness for which, under more tame circumstances would incite outrage and resentment in others. To ‘get away with blue murder’ (both literally and figuratively) is probably not unlikely in instances where the violent force of one’s conviction seems most ‘noble’ and ‘divinely sent’. Leo rules the heart, so this placement means that Mars is in passionate alignment with what ‘destiny ordains’. Of course, humanity and its man-made laws may have its own judgements on such cavalier conduct, and even Napoleon met his Waterloo [see ‘hubris anger gods’]

In any sense, a brash willfulness inflames any endeavour on this New Moon, a proud assertion of dignified or indignant sovereignty and the balls and valour to pursue glory or defend honour, for kingdom and for crown… A fixed/fire Mars energy generally kindles the entire lunation with such overbearing heat, that if in the hands of a conceited egotist could unfurl the most tyrannical fireballs (or at least a snappy toothless snagglepuss).

One thing is certain with Mars in this position, if the tributes aren’t forthcoming as we’d like (or should demand) them, there could be dramatic showdowns, proud displays of indignation and violent temper tantrums. Leo’s vanity easily gets irritated or offended when the world fails to show appreciation and support for their heaven-sent brand of despotism. It’s not unlikely that the mission statements we see now somehow place the individual above the law, a throne position, where they feel they only need to answer only to themselves. This must be watched, though not likely to be easily curbed, except there’s….

Needless to say, with this hard aspect now separating, it appears that there is not much sympathy for those who choose to selfishly pursue their own individualist means. Anyone who shows disregard for the dignity and empowerment of others, no matter how ‘fine and noble’ their own intention may seem could become the vent of building nervous tension.
Uranus (in the late degrees of Aries, another fire sign) does not give a flying hoot about anyone but the self getting heard. It indicates that a wild force of resistance acts as the antithesis to anyone’s selfish & grandiose schemes. And since we’re all charged up with a piece of thunder and lightning, this could prove to be quite a storm…

Abruptly inflamed personality clashes are likely due to disparate ideas on how to best govern over the ‘domain’ (Leo’s ‘kingdom’). Obstinate defiance, obstruction and defiance are likely to erupt over what appears nothing at all, creating a difficult battleground that may be impossible to manage. Agitators and saboteurs may surface merely to play devil’s advocates to the existing order. These would challenging the integrity of others rulership, especially those who choose to rule by might, bluff and the bluster of propaganda and pompous grandiosity, qualities for which Leo is famously criticised. They may do this for the sake of their own integrity, or merely to outshine those in control, or simply for the mere sport of it.

Domestic matters could easily become unsettled now, especially if there are any signs of underlying tensions. Any unresolved internal conflicts, past or present, could suddenly come to snap into highly erratic, individualistic spasms to break free.

These energies are likely too, to manifest in the wild nature of the collective.

A kind of autocratic fever for freedom starts to spread among the masses, creating a wider atmosphere of social unrest and wilful agitation all around. Public incidents, which precipitates into group resistance or mass protests against authorities trying to seize too much control, may be quelled forcefully by the autocratic Leonine rulership using martial forces, as indicated by the Mars in this lunation.

Although a minor aspect, it is significant in that (along with Uranus) it indicates the powerful collective forces acting upon this lunation. Subtle energies, in the form of “alternatives” creep in to confuse and undermine matters. Lies, delusions and underhanded dealings try to subvert or weaken the honour and decree of the individual, striking at the sensitivities and uncertainties of anyone to express themselves, particularly in proud and forceful ways.

It is therefore important to stay mindful that any endeavours undertaken with dishonest, deceptive or delusional intent will most likely suffer the same effects as pure light being diffracted through a smeared lens. Sometimes the best action is not to fight forcefully, but to humbly accept, embrace with a lack of vanity, express modesty, kindness and love without judgment.

The instinctive urge and determination is there to take action to clear the emotional body, exorcising it from its ego-bound ghosts of the past. Here, the expressive Leo must learn that in order to heal its issues, many of them emanating from blows to one’s vanity and sense of prestige, one must know that the heart always has the final say. If there are any such wounds, past insults or offenses to the ego, it’s best to lay them to rest, pick ourselves up and make like they never happened. The redeeming factor for Leo is in one’s ability to show strength and courage to be oneself, regardless of what others may sling against us. True integrity and ultimate self-dignity will come from learning to let go of the wound stories and focusing on finding security in fluidity and flexibility rather than rigidity.

In a world so completely overrun by influential people who constantly pitch themselves and their ‘authority’ over us – parents, teachers, elders, peers, bosses, religious and political ‘leaders’, manufacturers and their marketeers, etc., it is important to identify just how much of who we are is genuine and true to our spirit and how much is merely a manufactured role that we have taken on in order to survive.

Self integrity is critical here. Sometimes it is necessary to take a more aggressive stand to be ourselves, and to defend that over what is socially expected and morally correct of us. Whilst this may draw us into the world of drama, we also have a choice on how much we play into that. In the centre of our being is always the Self. Defending that against the selfishness of others becomes and imperative under this Mars New Moon in Leo. After all, if we do not proudly stand for something, we are prone to abjectly fall for anything.

BOOK A SESSION WITH ANG