Share
It’s Full Moon time again. In the prelude to eclipse season, this moon – this Capricorn ‘Hades’ Moon is setting the stage for some quite powerful changes about to unfold on our planet. The Hades Moon occurs when a lunation makes a significant aspect to Pluto, stirring up issues of birth, death, and rebirth; abandonment and rejection; catharsis and crisis; hubris and nemesis; family dynasty and tribal karma, transformation and new life. It is a time to access and work through the depths of past trauma, compulsion, and alienation. No other effect has quite the same metamorphic and healing potential as the Hades Moon.

Generally speaking though, the Full Moon creates a stark contrast between two key areas in our personal lives: 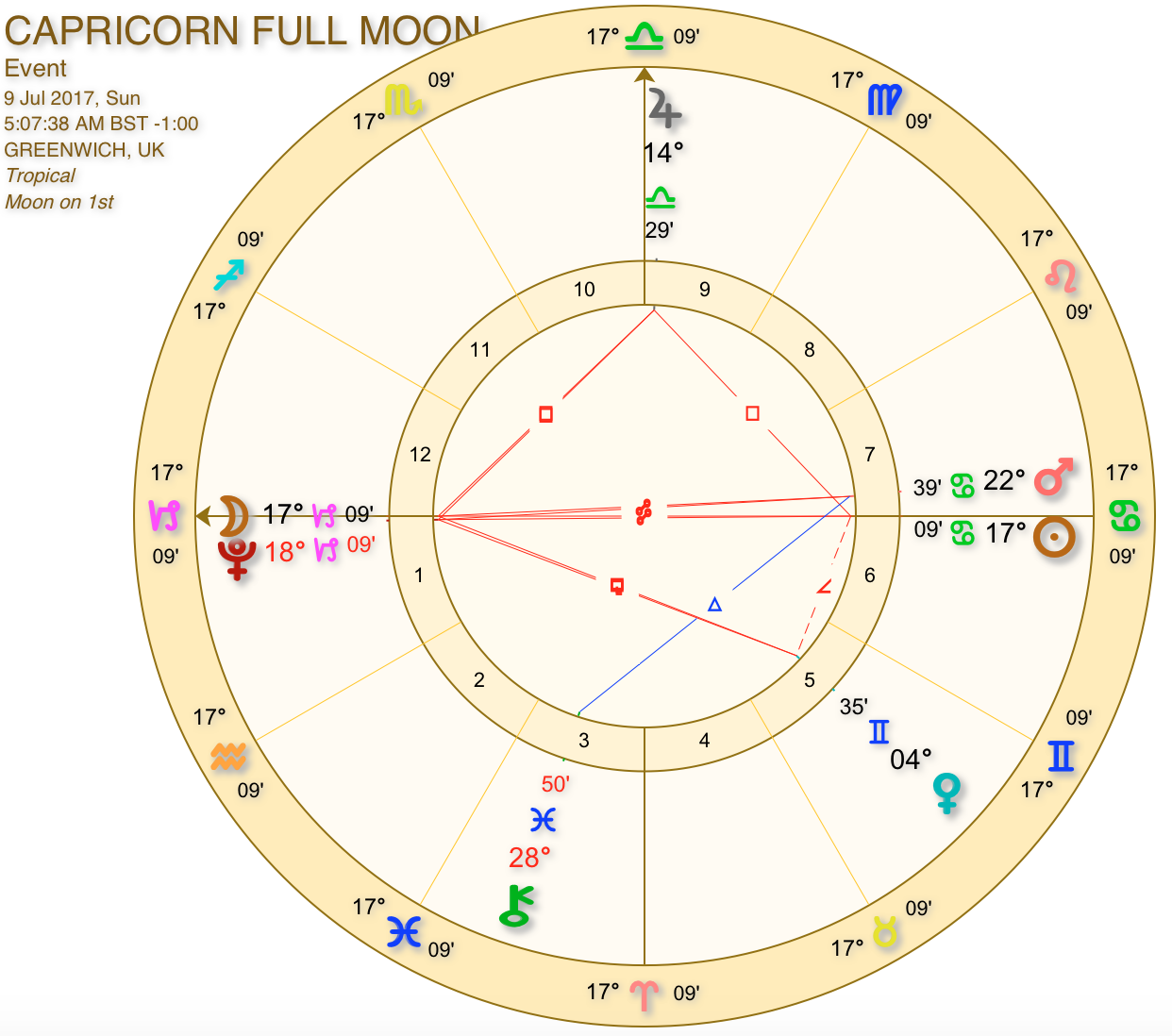 By the Cancer Sun’s light, our conscious will is to make ourselves emotionally happy and secure. We want a  safe, comfortable home, harmonious marriage, happy family, well-functioning domestic order, a steady and reliable world to hold us. The Sun is our authority – the decision making figure in our lives. He emanates his energy and light from within, does not seek to do this using anybody else’s help and support. We either personally identify as resonating with this energy or we assign someone (or something) in our lives as he who shall generate these Cancerian qualities for us. The Sun in this equation is challenged by the dark, transformative forces of Pluto and the expansionist philosophies of righteous Jupiter.

The Capricorn Moon has practical, earthy needs. She carries the burdens of propriety and moral obligation with an air of ambitiousness to meet society’s expectations of her and her family. Her personal needs are overruled by a sense of duty and responsibility to her role as a citizen, an upstanding parent, a holder of structure and discipline, and respectable social status. Deferring any display of emotion, she reacts to most situations with a hardened, ‘grown-up’ sense of sobriety and seriousness. Fear of being judged is a common motivator for this moon. Discipline and reprimand are her way of keeping herself and others in line. It’s a bit Dickensian – bleak house, hard knocks, tough love and all that, but hey… that’s life when one must tow the line at the mercy of the exterior judgment (Capricorn). It is the antithesis of being able to go with one’s instinctive needs (Cancer).

This is a critical, turning point for all of us. The Moon’s conjunction to Pluto at 18°♑09′ makes this lunation a emotionally precarious time, especially for sensitive egos whose inner nature is filled with complexities. Anything hidden underneath the surface (possibly built up over an entire lifetime of suppressed emotions, traumatic episodes around authorities/parenting, limitations and frustrations in general) could suddenly erupt without so much as a moment notice. Emotionally triggering events – little things that set off years of repression and disempowerment could suddenly unleash torrential rage and fury, unfurled without any discrimination or mercy for its absolutely devastating effects.

In some way, the Moon/Pluto’s contrast (opposition) to the instinctive, supportive Cancer Sun will see a sweet release of years of trauma and pain after years of eating away at our suppressed inner child. Whilst it cannot be restrained, filtered or mitigated, it can be managed with enough tender care and intuitive understanding. However, if efforts are made to resist the outpour of seemingly uncontrollable emotion – and with the Cancer Sun conjunct Mars, there could be attempts to muscle over, sanction or ignore – the effects could be as catastrophic as a volcano, violently spewing lava onto everything that surrounds. In this, it promises the onset of renewal and regeneration, not just on a personal level – but for the planet and humankind as a whole.

It is possible during this Full Moon that we may relate to one side very strongly and not be able to stand the other side at all, or both, or none at all. It all depends on how caught up we are in the drama and how successful we are at maintaining a neutral state of balance and objectivity in our engagement with even the most personal of our affairs. Given the enormity of the weightedness of this moon however holding a neutral, non-partisan point of view will be most challenging.

In its most impactful contacts (check your chart), the Hades Moon has the mystical power to dredge out some deeply buried, often forgotten, hurtful and haunting memories of our past; evocations of ghosts and painful dramas that can emerge out of the deepest, most repressed and hidden recesses of our psyche. Behavioural issues that stem from perhaps even before our own lifetimes; transgenerational themes and conditions tied to the actions of our ancestors, tribe, nation. Often unresolved ills, atrocities and abuses carry over throughout dynasties, affecting our present-life psychology more than we can comprehend, let alone accept and process.

This moment can be a time when we open up the vault of secrecy and bravely, through the help and guidance of counselling or mediation, uncover some of our most deep-seated frustrations, self-denying behaviours and heart blockages that lead to a certain emotional hardness or limiting of our ability to show empathy.

This explosive dynamic, if not received maturely, can manifest as torrential emotional storms in our most personal affairs. If not approached with some degree of tender handling, using compassionate analysis, extraordinary patience and perseverance to identify the emotional triggers, recovery and reform cannot begin to take place.

Other main themes in this Full Moon play out most fiercely this time. The recent Mars/Pluto opposition (July 2) began to apply intense pressure to bring our masculine, assertive side under control. Triggered by this Moon, should our pressure-packed intent to act instinctively feels thwarted or repressed, the reactive force may erupt with brute force, easily escalating to thermonuclear levels of offense/defense. The resulting drama and its aftermath (fallout) has the power to affect our relationships so extremely that we may finally accept it’s time to change our ways for the better (evolve) or be destroyed for good.

Either way, where Pluto is involved, there’s an interminably ruthless struggle to transform someone. One way or another, whether done with light upon shadow, or darkness over dim-lit souls, a battle to the brutal egoic death could ensue. If this is not handled with caution and maturity, the process (win or lose) could get so dark; ugly; morally and ethically reprehensible that monsters lurking here among us could appear to rise, much closer than we ever imagined…..

…if egos are involved, that is.

Have you have been recently engaged in personal dramas where domination and control, especially where family and security matters are concerned? This may be a time where seismic shifts can bring great resolution. If out of spite or hubris, you refuse to let up and restore others back to their own power,  do not be surprised to see them turn their ire and vexation upon you. The massive transformative force held by this lunation, could catch you in a moment of weakness and vulnerability, where all the ills ever committed unto others may conspire, as if at once, revisiting upon your front door….

“A Native American elder once described his own inner struggles in this manner: Inside of me there are two dogs. One of the dogs is mean and evil. The other dog is good. The mean dog fights the good dog all the time. When asked which dog wins, he reflected for a moment and replied, The one I feed the most.”
~ George Bernard Shaw

By the end of the week the level of subconscious emotion could swell to chthonic levels of pressure, waiting to unleash itself wherever/whenever we are least mindful. Anything could set off an enormous, volcanic-style eruption.
The earth cannot swallow and hold down much more garbage. Our processes to recycle and renew have merely produced a stream of bastardised rehash and regurgitation out of something that once may have had some meaning, but whose overall usefulness in today’s age has all but expired due to our dramatically accelerated lifestyles.
Leading into the August Eclipses, this particular lunation and the New Moon that follows it on July 23 (00°♌44′) suggests that an intervention of the highest, most totalitarian order seems necessary to overthrow our displaced value system and bring some balance back into line. Perhaps the T-square from Jupiter in Libra will be the saving grace. Perhaps Jupiter’s inflated influence could overblow things out of all proportion. How will this play out in a world so lost and out of control in its romance with liberal freedoms and democracy?

It is a critical, turning point moment for all signs…. (subscribers, please sign in to read your special message – full reading for each individual zodiac sign )

Your natal chart is a map of individual consciousness manifesting out of the abyss of the collective unconscious which surrounds it – a consciousness coloured and shaped by the relationship of its disparate parts.

Learn how your chart is the spiritual roadmap to what lies ahead.

Book a session with Ang (via Skype only)
Quick and easy application: simply complete the linked form https://angstoic.com/appointments/.