Share
There is a strange nervous energy building as we head into this Aries Full Moon on Sunday. The following explanation may seem a bit dramatic and somewhat unnerving, but the dawning reality is that many of us already feel that that there has been a jolting shift – a complete rewiring in our relationship interdynamics, and even though the mechanics of the change have not occurred overnight, this full moon (as full moons do) only highlights the changes.  In this instance, it does this by contrasting some significant changes in both our individual, and collective nervous systems. 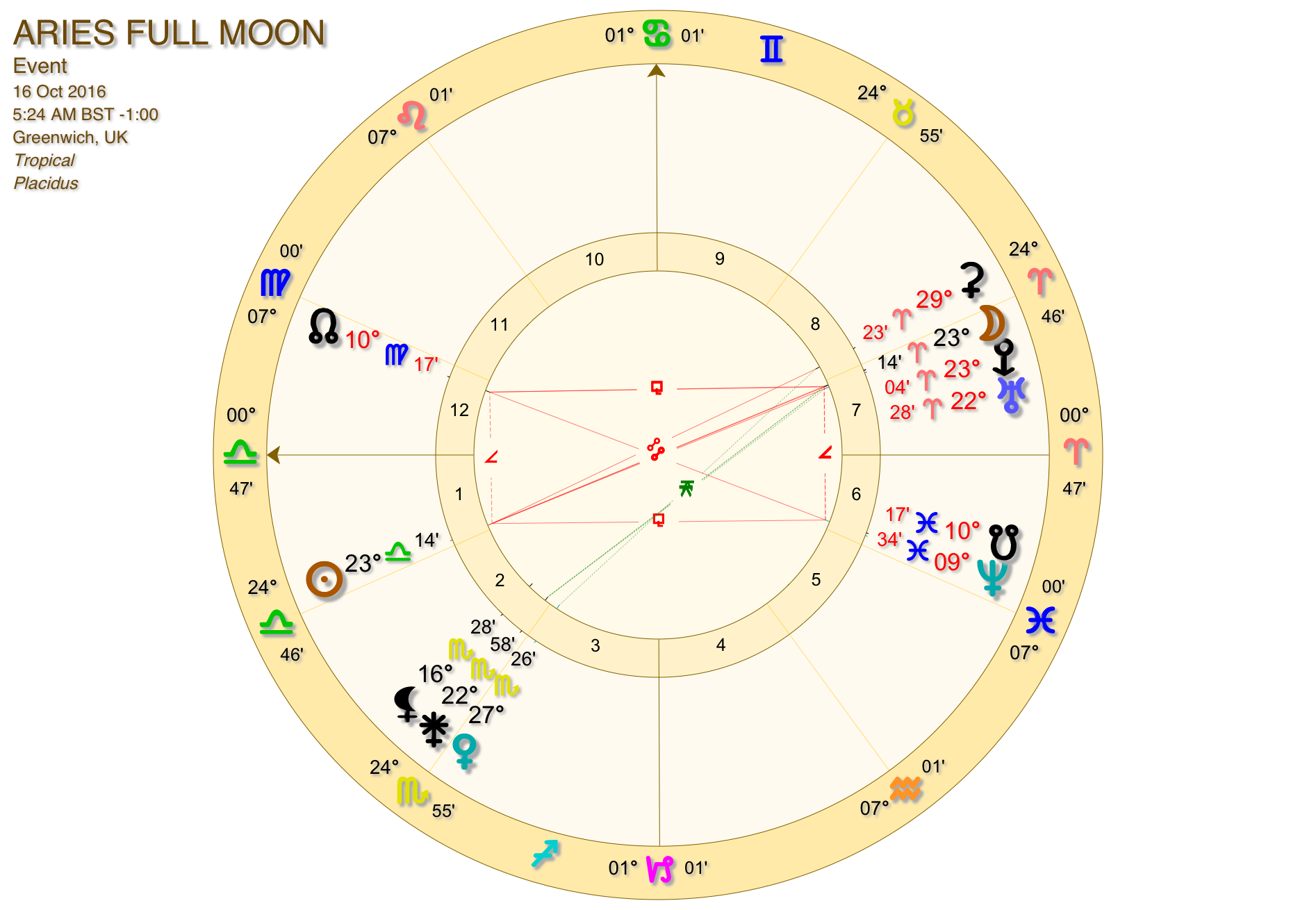 Another phenomenon that I have covered already is the outer planet Eris inclusion into this lunation. Eris, a feminine warrior-type goddess, is full of strife and discord, and when mixed with the emotional rebelliousness of the Moon/Uranus, the revolutionary effects of this time can be far-reaching and impact our world in such provocative and irrevocably intense ways that it may be difficult to restore balance and harmony without taking a massive leap into a brave new way of dealing with the world.
Interestingly, and referring back to the US presidential campaign, it is the recent unearthing of a video of Trump in 2005, then famous for hosting the ‘Miss Universe’ contest, when Eris first entered our consciousness that acts as a catalyst, as a grenade that disembowels the whole trajectory of our existing state of affairs. This is how Eris works, since she has only moved a couple of degrees since 2005. At the time of her discovery, she was conjunct the Aries North Node and opposite Jupiter (who has now only just returned to Libra).
One thing we are observing is the phenomenal pace in which we are evolving regarding the freedom of women to assert their unconditional freedom and independence from the repugnant culture of the patriarchal masculine. It is obvious that there is still a large contingency among us (both male and female) who have a radically resistant, or conservatively antiquated approach to understanding that the needs to express one’s untarnished personal individuality as a basic, fundamental human right.
So much discussion to be made on this now. Without labouring the point too much here I might add that this lunation only indicates that the entire human race is brought to a monumental standoff. We are at a point where we will momentarily stop listening to the political clamour of outsiders, where all external props to our emotional well-being seem wholly unsatisfactory, become fiercely rejected, and the lines of dependence become interrupted or intercepted. The restlessness that you, and those around you are sensing at this very moment is the intuitive force you feel that much out there has to be detached, dropped, be instantly abandoned if anything new and deeply satisfying has any hope coming through. Only you, in your infinite internal wisdom has any hope of ever reclaiming and restoring a much needed balance and order back into your relationship with this world.
It all starts and ends with you. And you know this.
Since Libra has much to do with our ‘special’ relationships, then eventually, hopefully sooner than later, we might discover that the best relationships – the ones that really satisfy our soul – are ones that are deeply rooted in a true friendship and kinship to one another. Only in an equanimous sharing of everything this precious moment offers and everything it has to bring will we ever hope to get on amicably and peacefully. The day we look to one another and observe something more genuine than what we saw the night before – like a switch has been flicked somewhere – is the day that we realise that this person who just yesterday was just a friend (or dear enemy) is suddenly a very significant person to your overall self-understanding, perhaps even the only person you could ever imagine yourself being with.
Now let’s review and ask ourselves. Are you the same person that you were in 2005?
How has your interrelationship dynamics changed – can you see? How much do you identify with any preconditioned expectations of your gender or social position and how much have you moved forward into your own unique sovereignty? How well do you relate with the opposite sex? Is the power dynamic between you and the not you different? One would argue that things are about to evolve considerably, and certainly (by Jupiter) this is for the greater benefit of all.
Blessings, and have an amazing Full Moon xx

Ang Stoic is an astrologer and cosmobiologist based in Byron Bay, Australia. To book a private consultation, please complete the linked application form https://angstoic.com/full-comprehensive-reading/appointments/ . You will receive a full response about your reserved appointment within 48 hours.