New Moon time. A new month begins in some area of your life, and the Sun/Moon conjunction fuses together the moon’s receptive flow of energy and information from the subconscious(☽) to the conscious(☉), INITIATING an emotional process that impresses new meaning and order into our personal lives. In this unification between (☉)activity/reactivity(☽), between(☉)business/pleasure(☽), and objective(☉)/subjective(☽) we place intense focus on the modality and element in which the luminaries meet. 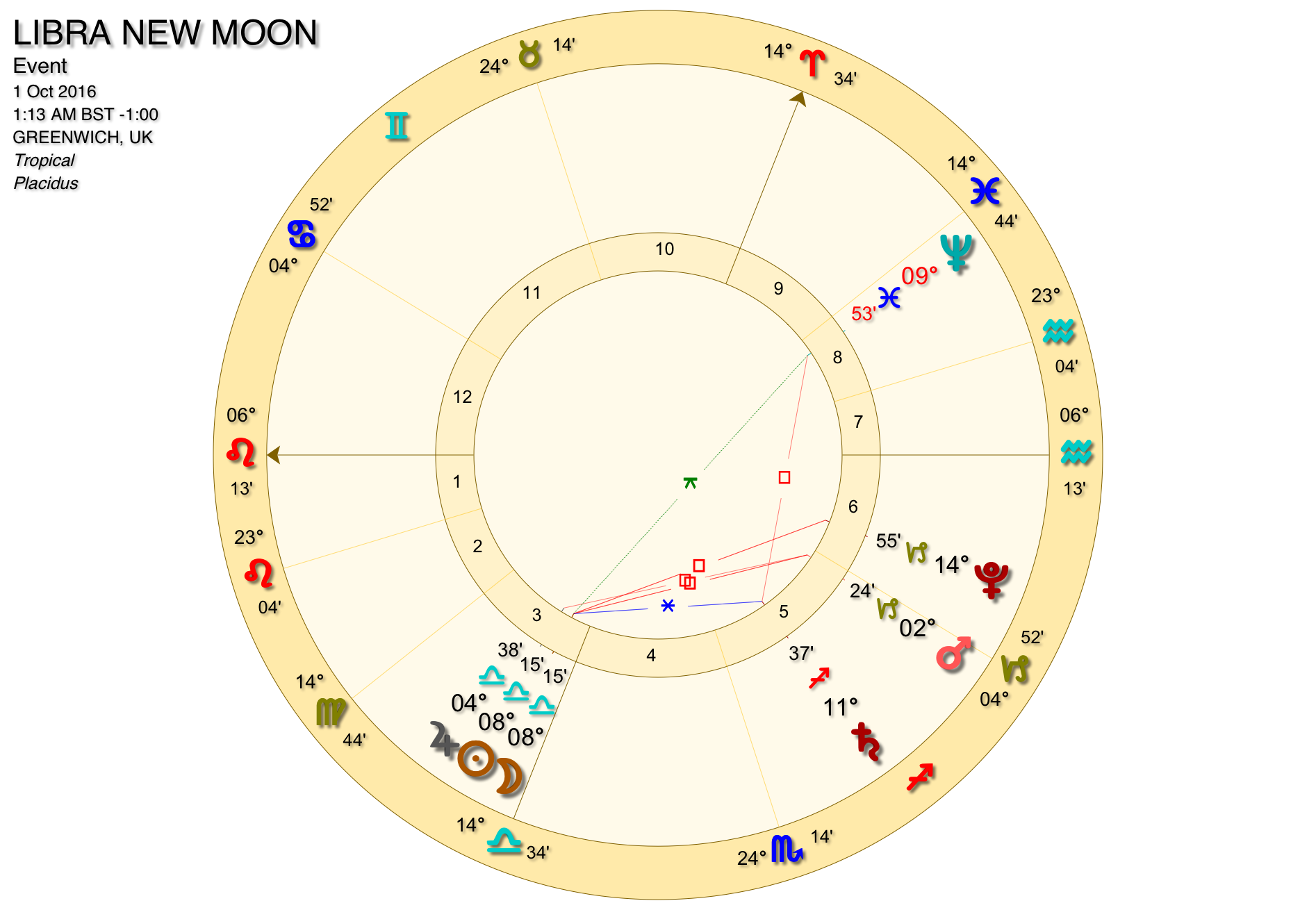 With Libra, a cardinal/air sign, the soul begins to acknowledge the presence of another soul, and via the ego – the expression of the personality, sees that it keeps the interests of the other in mind whenever acting or reacting. Of course, personalities differ, so the fun is all in the interaction and how to keep the peace while going about trying to satisfy one’s ego business/pleasure.

At a Libran New Moon, the activation of any new venture at this time is with aim to keep (or create) harmony and balance in whichever affair is highlighted (see your rising horoscope). In many ways we make a start, a promise, set an intention to find a method or sweet spot where we can wilfully oblige others, as well as instinctively meet them halfway, totally persuade them we can make things nicer, more workable, more peaceful. Using our intellectual (air) ability to discuss, we initiate (cardinal) an engagement where civilised debate – strategy and tact, guile and subtle manipulation – is employed to bring ourselves and another into a more balanced, sustainable and peaceable position. Of course, with all the emphasis in this constellation, it’s all or nothing where effort is applied. You either connect with the Libra way or it just grates against you somehow:

How? The following planets/midpoints are currently in tight aspect to this Libra New Moon: 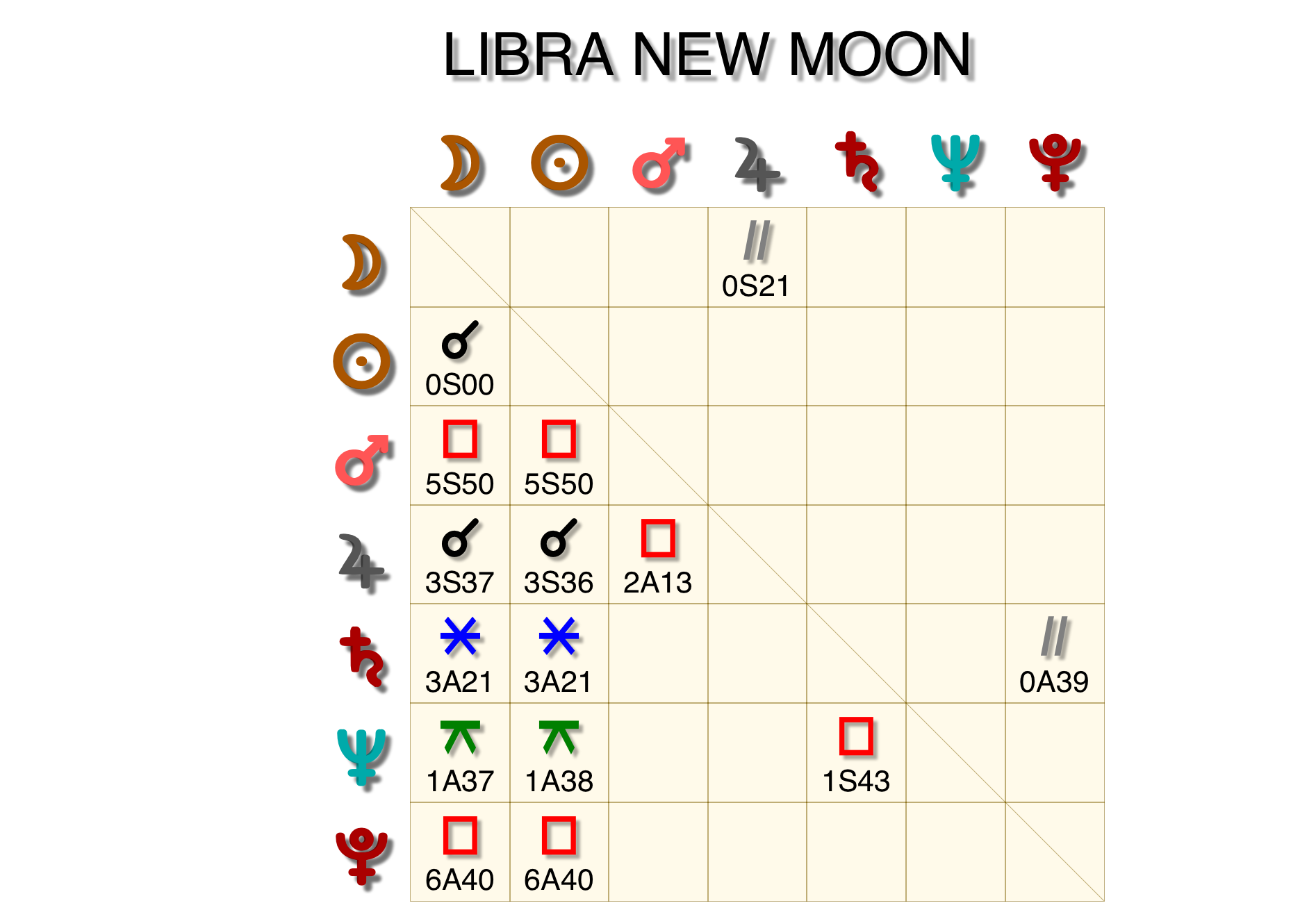 Neptune’s applying conjunction to the South Node in Pisces, and separating square to Saturn has been emotionally and physically depleting for everyone lately. Much has been written about the Saturn/Neptune squares over these last 12 months, especially by this author, but the feelings of blues (and greys) are mainly symptoms that we are awakening out of an inebriation with some fantasy or at least some fancy notion that, in this awful hangover stage, seems purely unfeasible and unsustainable. As diplomatic as the logical Libra Moon may be, there is little sympathy for any Piscean delusions now, and since the two don’t really get one another (quincunx), this can feel like quite a burdensome situation that will need to be worked around with much subtle adjustment, even polite little white lies to avoid any tears, which are really bursting to happen, if not already.

Here, the New Moon welcomes some grounding. Libra’s tendency to smooth things over in aim for equilibrium is ‘nice’ but, truth be told, little white lies and euphemisms just won’t cut it in a world which is just withered and defrayed by all the bullcrap soiling the place over this last year. This New Moon quickly realises that if a peaceful, or workable solution is to be made, we need to chock a wedge into place to prevent things from slipping backward or inflating into fairy land again. Tough new measures are needed, especially with staying real in our partnerships, marriages and public relations. Saturn may help to reinforce the ongoing framework with facts and truths, yet his square to Neptune is a reminder that even these ‘realities’ have become highly questionable. Suggestion might be to seek within (intuition) for the ‘facts’ on anything, and stay grounded and in balance by doing personal work.

Much of the exuberance and whole-hearted enthusiasm that is experienced with this conjunction depends on how closely one relates to the Libran persuasion (see Jupiter horoscope here), and then, thriving on hope and optimism to make ends meet is simply not enough to become vitalized by this conjunction. One has to really come to embody the attitude and philosophy that any effort to meet others at one’s best will enrich and expands the experience for both parties, and since it’s possible that we have become too involved in many unrealistic things or have overextended ourselves into a universe that is markedly different from our expectations, this gust of hyper-inflatedness can act just as much to drain our vitality and generally upset this much-desired balance. Advice is not to expect too much, just be grateful for what works.

Since both of these two planets are now in Capricorn, soon to conjunct (Oct 19), this becomes the most significant influence, and – in my assessment – overrides all others due to its proximity as a midpoint and near square aspect. Mars/Pluto applies intense aggressive force that can often become overpowering, or obsessive. Whilst the benefit can be that it provides the energy to accomplish extreme amount of work, to be brutally frank, ruthlessly ambitious in Capricorn, if this force is not applied in ways that affect the whole, or at least a great mass of people, it can become a contest where domination over others, or trampling over them in a heartless, uncaring fashion can expose some seriously sociopathic behaviour.

This lunation then acts more like a divine intervention by Spirit, forcibly grounding any ongoing confusion by imposing adequate counter-measures that challenge these extremely ambitious masculine forces. By stimulating intense discussion through fierce conflicts, we get to see the stark contrast between the constructive and destructive aspects of trying to exert our power to make changes in our world.

Also significant is the exact opposition to a pair of stellar bodies which, due to their eccentric elliptical orbit came into exact opposition forty-one times between 1952 and 1989, which means that to some extent, this is an aspect common to many of us born during that period. It is the very quality which stimulates the accelerated pace of scientific advancement during the second half of the last century, but also manifests as a great social problem in that we are struggling to integrate many of our technological and spiritual advances quickly enough into society, thereby becoming exposed to many dangers and side-effects from evolving or moving faster than we can safely handle.

This Chiron/Uranus quality, familiar to a great percentage of those between 26-62 years old, stimulates the progressive urge to relinquish all biases, judgments and preconditioned notions of how spiritual forces may manifest. Those in whom this opposition is strongest placed in their natal chart (by alignment to personal planets/points) are capable of spontaneously experiencing (or creating) shocks and sudden awakenings, often through very subtle ways, to the realms of alternative, or spiritual dimensions of life.

Therefore see an explosive rise in what is already a natural thirst for the provocatively new, for the revolutionary, and for the shocking, often at the expense of taking of any precautions become activated by this lunation.

When put into context with all of the above influences of a world trying to balance and curtail the freedom of any one individual, we can imagine that the consequences may not be all that pleasant. Such is the tremendous urge for independence in the Chiron/Uranus opposition people – especially if this aspect is also activated in charts by other prominent transits, that this Libra lunation may activate a mass revolution, particularly among those who are in relationships where they feel they are not allowed to express themselves independently, or are not given ‘their own space.’

This New Moon then becomes a klaxon call that we, as a tribe or species of humans, are becoming radicalised from the inside out to create and hold space in order to dispel any undue pressure from our exterior world – one which has apparently failed to deceive or delude us, or at least to satisfy us with its flaky structures and laws, and one which certainly does not stand a chance of forcibly pressuring us into places that do not abide with our own instinctive urges to evolve, even they occur much faster than is relatively safe, supported or secure by our relationships or our physical environment for our best well-being.

Many judgements, many radical decisions will appear to be made now, perhaps even by ourselves – often contrary to those that everyone around us is expecting. We may even surprise ourselves with what choices we decide to take up. It’s not that we are trying to be difficult with others. This is simply a time of great activation on our planet, and humans are rising, en masse, against convention to express their dissent against the chastisement and curtailment of their fundamental freedoms.

The cause is almost obvious – people are fed up – nobody is happy with any form of suppression, repression, oppression or depression. Nor do we look towards any leaders/heroes/role models any more. Unlike past generations, we don’t have time nor value for any outward avatars in the lives that we wish to create for ourselves. Inwardly, we each have the crazy means to break free from all this. However, the effects of a swelling critical mass that threatens to act in radical ways are going to be much harder to predict, especially since the break towards liberty threatens/promises to affect so many.

We live in exciting times…

The accuracy of reconstructing a life can often bring up influences that are not common knowledge to us, despite our resistance to understanding some of the critical points in our lives, ranging anywhere from conception to old age. This is even more the case when the events happening in our early life that our parents either refuse to tell us what have kept as family secrets have a profound effect on our behaviour, both within our psyche and reflected (or projected) in our relationships with others.
Ironically, we must understand the power of our past in order to live in the present. This is the first stage of empowerment when stepping out of our 3D conditioning into the invigorating and liberating 4D (present moment) experience.

Astrology literally means “knowledge of the stars”. Using your astrology chart, my practice is to translate the earth’s movements relative to the stars into a system of timings that then determines the unfolding of life events. As we understand the mechanism, dynamics, and realities of ‘linear, 3D time’ we begin to better understand the root of how we perceive our lives in present moment consciousness. This, in the Chirotic sense, is what becomes the key to your freedom from any karmic patterns.

For you followers of this growing ‘Cosmic Tribe’ that i have not yet had the privilege to meet, and members of the public, I am extending the invitation to have a ‘Lifetime Shamanic Session’, a personal ‘rite of passage’ through your life-journey that transcends linear time and places you as a passenger (or observer) of yourself in present time. My aim is to create a space for you and teach you tools where you can see the essence of your own story, assisting you to dispel some of the myths and innuendo that is commonly created in the telling and re-telling of a tale which becomes often subjective and tainted with foggy memories and wildly romanticised (or victimised) versions of your pure self.

This 2-hour session is offered at a premium USD$145.

Simply complete the linked form https://angstoic.com/full-comprehensive-reading/appointments/ , and quote ‘SHAMANIC LIFE SESSION’ in the comments section of your application.