It’s Full Moon time, and it’s the opposition between thoughts and ideas (Gemini) versus our cherished beliefs which becomes the crux of this week’s story.

There’s a lot going down in the world of thoughts and ideas – communications flowing, ever so ‘freely’ thanks to the deluge of digital information, and then, all the public forums inviting interaction to discuss and share. There’s lots of movement, we’re free to move around and express our voice… right? It seems like anyone who is anyone these days is armed with the freedom to inform us in their own unique way, has a pertinent story to tell, a point of view to project, a worthwhile opinion to express.

It’s true – every time our brilliant human mind picks up a thought or idea, our heart also make a choice on whether that information is useful to us or affects us personally. We then go so far as to attach an emotion to that thought. In this process, in making an idea personal, we form an opinion. If that opinion stands with us, it forms the basis of our belief.

Since what we come to believe means so much to us personally, we find get emotional when we are confronted by the thoughts and ideas of those who clearly disagree with us. One might say, we take things personally.

Arguments quickly mount, and we either sway the other party to our point of view (or visa versa), or we conclude that they are someone who needs to be earmarked as an opponent to our precious views. ie… they are an “idiot”.

As you may have experienced yourself, there can be ill sentiments held against those who fundamentally oppose or deny our ideological, scientific, religious, political, even you most delusional or incongruent views. Because essentially, we all want to be accepted, and to not be understood or believed is, in the end, in principle at least, not going to work out. 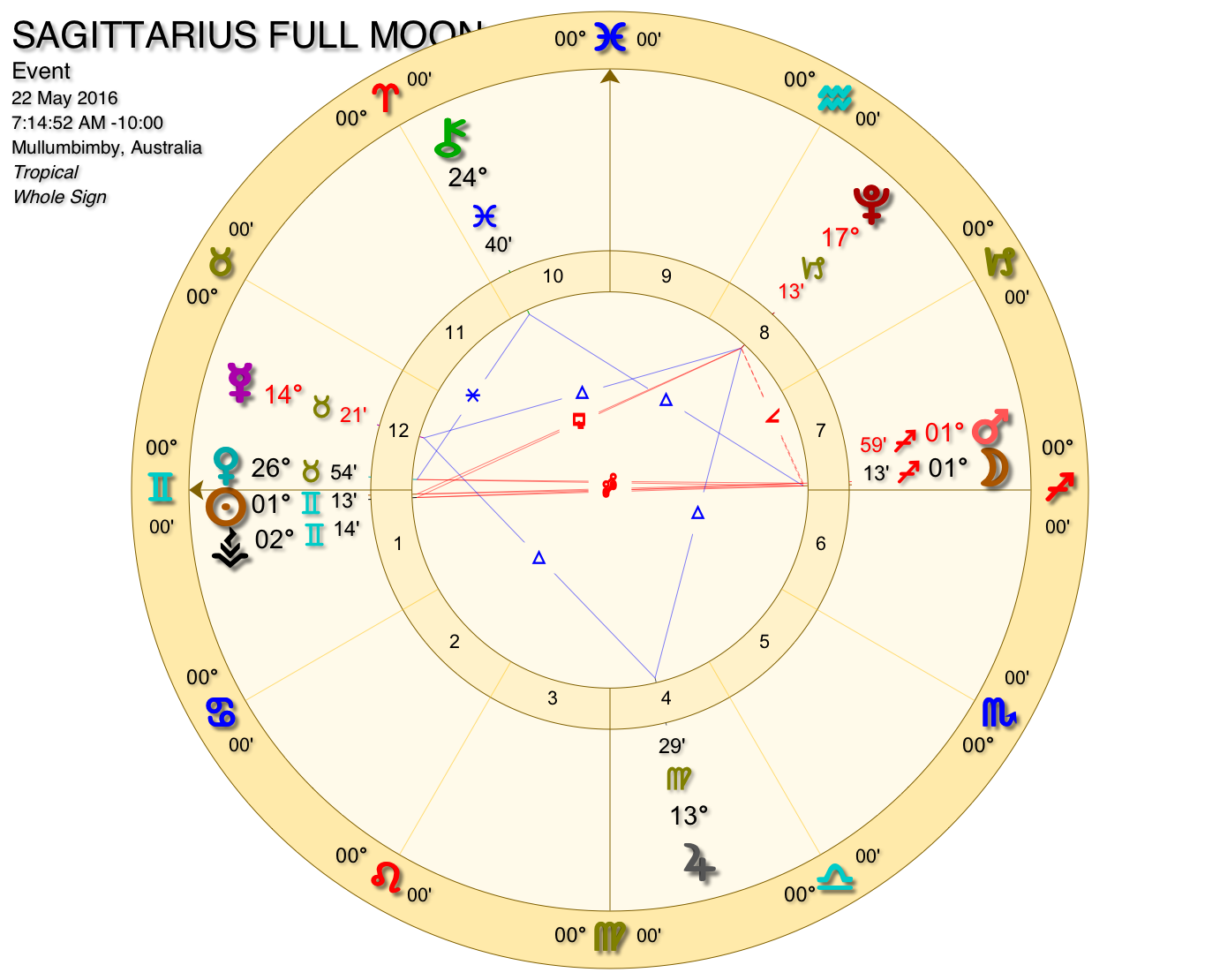 It’s this which becomes the root cause of all the tension this week.

The fact that this fiery Sagittarian Full Moon is also conjunct the red-hot warrior Mars (now closer to earth than ever in the last 10 years), who in retrograde is about to leave the fire sign to enter into brooding Scorpio (May 27), has indeed some significance.

Mars does not function well in retro. He usually likes to direct his action outward, so when his efforts are turned inward we see his usual aggression being thwarted into a seething frustration that cannot be properly vented. When you mix this energy with that of the impulsive Sadge Moon, you get one pissed-off feminine firebrand warrior who is firing arrows into the ground in a frustrated ire that her views and beliefs are not being taken seriously by that breezy Gemini Sun.

The Moon/Mars is also exactly conjunct the star Antares -the ‘heart of the Scorpion’ – a badass motherfucker who takes no shit from nobody… should you even look at this guy the wrong way and he’ll shoot you in the eye. Traditionally Antares is the rival of Mars (anti-ares). Always the black sheep of the family, he felt a sore that nobody could ever understand. In fact, I don’t think even he knew what he was so sore about. He just went around, chip on shoulder, like he had an ‘ante’ on the world.

I wonder if any of you know anyone like that in your world.

Anyway, in the blue corner is the Gemini Sun, is full of ideas to express. Lots of talk – information aplenty, brilliant yet duplicitous in that he will tend to fluctuate in his always flighty standpoint. He will say whatever has to be heard, because let’s face it – Gemini is about spreading the facts, right? No feelings at all about the matter, just getting the point across.

He’s just a spokesperson. An authority on information. An envoy. A messenger.

He’s just say what must be said, let all others decide what emotions to attach to his words. Let all others determine whether what he says is true (for them). Let all others believe what they want to believe. Flanked (in conjunction) by goddesses Venus (in Taurus) and Vesta, this guy also looks good, and is heartily devoted to the cause of getting those message out.

Since the Sun/Moon opposition  (marriage axis) is also aligned with the Venus/Mars opposition (passion axis), we see a real struggle between the feminine/masculine here. A real love/hate scenario is playing out among us now, and as I have been narrating in my recent mutable grand cross commentary, what we find most personally confronting now leads up to become the issue behind an epochal schism between two tribes on this planet.

It begins most intensely as a fight between the glib smartness of the masculine, who may seem clever, but not necessarily wise – and the infuriated feminine, cultured, educated into lofty ideals and ideologies but feels frustrated that her views and beliefs are not being received. In fact she often seems confounded with rejection.

This debate is not necessarily gender-based by the way. Nor is the struggle necessarily exteriorised through your affairs with others. You may observe this struggle going on between the two sides (inner/outer) of yourself. Part of says one thing another believes quite another. If you stick to saying what you believe, somebody appears to confound the situation.

Becoming engaged in verbal conflicts is one thing. Owning up to whatever ideological split occurs around you; wrestling between trying to preserve your sacred views and disowning the ideas coming at you, no matter how much sense or nonsense they’re making; being truly torn over what to think and what to believe, is quite another. How much you want to get fired up is now entirely up to you.

The adaptability of any planet in a mutable sign should allow you to look at things respectfully, by exercising greater flexibility and understanding. It pays to be philosophical, understanding that there are two sides to any argument. And essentially, the argument is all yours to choose or lose.

But let’s just make this clear. we don’t have much time to argue our case for persuasion. Mars will soon back into Scorpio who is very fixed and infinitely more emotional about his position.

Know too that the more fiercely you defend your ‘argument’, the more  intensely you will sense this opposition. Oh… and know too x2, with Pluto involved (semi-square to Moon), much vital information in the argument remains conveniently hidden. Which may (at a later date be vindictively revealed).

Ultimately, it is our beliefs that form the basis of how we experience our reality. What we choose to believe as true, ultimately becomes our reality. Therefore, this week’s personal conflict becomes a good prelude to a greater, more sociological crisis that affect us all next month – when we begin to collectively question and communicate with total conviction what is real (and not real) for us as a society. What we settle on through some of the personal confrontations in our lives at the moment, will go on to form the greater voice in the choices we make about what kind of world we wish to live in – the kind of dream we wish to share collectively with others.

We are now in the final stages of identifying with our cosmic ‘tribe’.

Much will hinge on how rigid we remain in our thinking. The more attached we stay to our precious point of view, the more we risk incurring the wrath of a vexed and frustrated emotional reaction from those who are opposed to our views. This could lead to ongoing tribal wars, so be mindful how dogmatically you wish to play this.

But then, it’s so easy for me to sit here and write things like “drop your fixations and attachments”… isn’t it? One might just say that this is just another blogger, projecting their own point of view. One might argue that one has the need and fundamental right to disagree, even with this next line:

Magically, you have the power to change the world now. How things turn out for you depends entirely on how you choose to see things.

In any case – the ball is entirely in your court. What you choose to believe is entirely up to you.

Blessings,
and have a wonderful Full Moon x